skip to main | skip to sidebar

Grand Masters of the Knights Templar 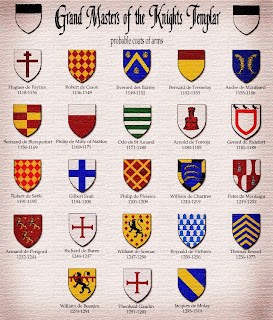 Text adapted from 'A-Z of the Knights Templar' by Gordon Napier
(above: Speculative representation of the arms of the Grand Masters)


The Grand Masters were the leaders of the Knights Templar. The Hospitallers were also under a Grand Master, as were other Military Orders (the alternative term Grand Prior was sometimes used by the Hospitallers, and the term 'General Master' was also used). The leader of the Teutonic Knights was called the Hochmeister. The Term 'Grand Master' does not appear in the Templars' original rule (only 'Master') but it s generally understood to refer to the Order's leader.
The Grand Master was the spiritual, political and military leader of the Order. He was chosen by a complex electoral system similar to that used in Venice to elect the Doge. The Preceptors in the Holy Land would usually choose a provisional leader until an electoral colleges, drawn from the international Order's chapters, could be established. Eventually after a whittling down process, the next Grand Master, who was in theory supposed to be an experienced, professed brother of the Order, and not a partisan outsider. The Grand Master was supposed to be beyond the influence of Kings, and to answer only to the Pope.
The Grand Master presided from Jerusalem, and subsequently from Acre (and from Cyprus in the final years). He was normally installed for life, though there was precedent for a Grand Masters resigning. The Grand Master did not quite have autocratic powers within the Order, despite the emphasis on obedience as a sacred duty. He could not access the Order's treasury on his own; one key was retained by the Commander of Jerusalem, who was also the Treasurer. He in theory ruled with the advice of a council, the Chapter, and rather as in an important monastic institution, important decisions were usually made at chapter meetings. The Chapter had to approve any decision to make war or to accept peace treaties. Moreover the Grand Master's power seems to have been limited when it came to appointing regional preceptors. The local brethren were able to have a say in this.
The Grand Masters frequently toured Europe seeking succour for the Holy Land from the western sovereigns, and also visiting regional Preceptories. In his absence, a deputy called the Visitor had the task of inspecting regional Templar establishments, to ensure they were maintaining standards and supplying the required men, money and provisions to the East. The Grand Master was a great and important figure during the heyday of the Order, afforded the honours due to a prince. The latter Grand Masters live in a palatial residence in Acre and travelled with a host of servants and retainers.

The list of Templar Grand Masters is somewhat controversial regarding exact dates, but it is generally thought to be as follows:


*With the Capture of Gerard de Ridefort in 1187 one Brother Terric took over as acting Grand Master. He used the title, but is usually not counted as an official Grand Master.
**Some lists omit Richard de Bures. This period of the Order's history is not well documented, and the central archives of the Order, which would doubtless clarify much, have not survived.
Posted by Gordon Napier at 05:06